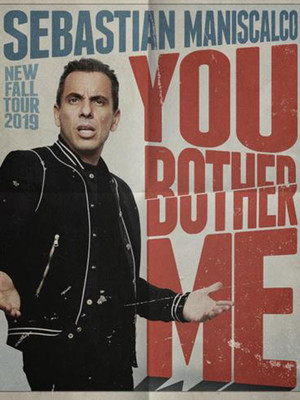 Sebastian Maniscalco has a problem with people, lucky for the rest of us, his annoyance results in some of the funniest stand-up comedy around.

You Bother Me Tour

Hot off the back of 2018/2019 smash hit Stay Hungry Tour, comedian extraordinaire Sebastian Maniscalco hits the road again with his You Bother Me Tour! Beloved for his honest manner and saying what we're all thinking, Maniscalco has become one of North America's most popular comics. Leave the kids at home as you enjoy the outrageously funny Sebastian Maniscalco!

Overcoming a somewhat bumpy start in stand-up, Maniscalco moved to LA at the age of 24, honing his craft while waiting tables for eight years. He caught his big break when actor Vince Vaughn spotted him and asked him to join his 2005 Vince Vaughn's Wild West Comedy Show tour. Since then he has appeared on TV shows like Comedy Central Presents, The Tonight Show with Jay Leno and Comics Unleashed. A man of many talents, Maniscalco also presents the hugely popular radio show "The Pete and Sebastian Show".

What a great night of entertainment!! Sebastian Maniscalco is hilarious... more

Great show. Just love this guy. We had so much fun. Right on the money... more

Sound good to you? Share this page on social media and let your friends know about Sebastian Maniscalco at Grand Sierra Theatre.