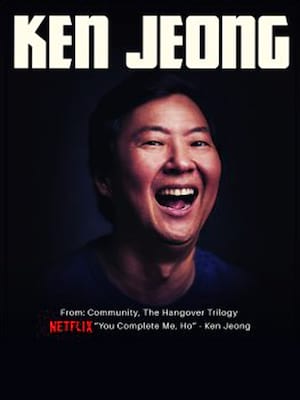 The one and only Ken Jeong

There's not too many comics that also have an MD to their name, but Ken Jeong is not your average comic. Born to South Korean immigrants, Ken was practicing medicine while honing his stand-up act through much of the 90s and 00s. His breakout role in Judd Apatow's Knocked Up finally had movie producers, well, knocking at his door, and scene-stealing turns in The Hangover and Pineapple Express, and a recurring role on NBC's Community soon followed.

In his stand-up, Ken looks back at his unusual path to fame, and dishes on some of his Hollywood co-stars as detailed in his  Netflix special, so grab your chance to see him performing his new material up close and personal!

Ordered tickets and paid over $70 to see him last night. We were very disappointed.... more

My 1st post has not shown up so I will write again. Ken Jeong’s standup... more

Sound good to you? Share this page on social media and let your friends know about Ken Jeong at Silver Legacy Casino.